Electronic scrap components, such as CPUs, contain potentially harmful components such as lead, cadmium, beryllium, or brominated flame retardants. Recycling and disposal of e-waste may involve significant risk to health of workers and communities in developed countries and great care must be taken to avoid unsafe exposure in recycling operations and leaking of materials such as heavy metals from landfills and incinerator ashes. 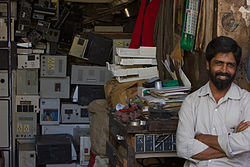 E-waste or electronic waste is created when an electronic product is discarded after the end of its useful life. The rapid expansion of technology means we are creating a very large amount of e-waste every passing minute.

“Electronic waste” or E-Waste may be defined as discarded computers, office electronic equipment, entertainment device electronics, mobile phones, television sets, and refrigerators. This includes used electronics which are destined for reuse, resale, salvage, recycling, or disposal. Others are re-usables (working and repairable electronics) and secondary scrap (copper, steel, plastic, etc.) to be “commodities”, and reserve the term “waste” for residue or material which is dumped by the buyer rather than recycled, including residue from reuse and recycling operations, because loads of surplus electronics are frequently commingled (good, recyclable, and non-recyclable), several public policy advocates apply the term “e-waste” broadly to all surplus electronics. Cathode ray tubes (CRTs) are considered one of the hardest types to recycle.

CRTs have relatively high concentration of lead and phosphors (not to be confused with phosphorus), both of which are necessary for the display. The United States Environmental Protection Agency (EPA) includes discarded CRT monitors in its category of “hazardous household waste but considers CRTs that have been set aside for testing to be commodities if they are not discarded, speculatively accumulated, or left unprotected from weather and other damage.

The EU and its member states operate a system via the European Waste Catalogue (EWC)- a European Council Directive, which is interpreted into “member state law”. In the UK, this is in the form of the List of Wastes Directive. However, the list (and EWC) gives broad definition (EWC Code 16 02 13*) of Hazardous Electronic wastes, requiring “waste operators” to employ the Hazardous Waste Regulations (Annex 1A, Annex 1B) for refined definition. Constituent materials in the waste also require assessment via the combination of Annex II and Annex III, again allowing operators to further determine whether a waste is hazardous.

Debate continues over the distinction between “commodity” and “waste” electronics definitions. Some exporters are accused of deliberately leaving difficult-to-recycle, obsolete, or non-repairable equipment mixed in loads of working equipment (though this may also come through ignorance, or to avoid more costly treatment processes). Protectionists may broaden the definition of “waste” electronics in order to protect domestic markets from working secondary equipment.

The high value of the computer recycling subset of electronic waste (working and reusable laptops, desktops, and components like RAM) can help pay the cost of transportation for a larger number of worthless pieces than can be achieved with display devices, which have less (or negative) scrap value. In A 2011 report, “Ghana E-Waste Country Assessment”, found that of 215,000 tons of electronics imported to Ghana, 30% were brand new and 70% were used. Of the used product, the study concluded that 15% was not reused and was scrapped or discarded. This contrasts with published but uncredited claims that 80% of the imports into Ghana were being burned in primitive conditions.

A fragment of discarded circuit board.

Rapid changes in technology, changes in media (tapes, software, MP3), falling prices, and planned obsolescence have resulted in a fast-growing surplus of electronic waste around the globe. Technical solutions are available, but in most cases, a legal framework, a collection, logistics, and other services need to be implemented before a technical solution can be applied.

Display units (CRT, LCD, LED monitors), processors (CPU, GPU, or APU chips), memory (DRAM or SRAM), and audio components have different useful lives. Processors are most frequently out-dated (by software no longer being optimized) and are more likely to become “e-waste” while display units are most often replaced while working without repair attempts, due to changes in wealthy nation appetites for new display technology. This problem could potentially be solved with modular smartphones or Phonebloks. These types of phones are more durable and have the technology to change certain parts of the phone making them more environmentally friendly. Being able to simply replace the part of the phone that is broken will reduce e-waste. An estimated 50 million tons of E-waste are produced each year. The USA discards 30 million computers each year and 100 million phones are disposed of in Europe each year. The Environmental Protection Agency estimates that only 15–20% of e-waste is recycled, the rest of these electronics go directly into landfills and incinerators.

In 2006, the United Nations estimated the amount of worldwide electronic waste discarded each year to be 50 million metric tons. According to a report by UNEP titled, “Recycling – from E-Waste to Resources,” the amount of e-waste being produced – including mobile phones and computers – could rise by as much as 500 percent over the next decade in some countries, such as India. The United States is the world leader in producing electronic waste, tossing away about 3 million tons each year. China already produces about 2.3 million tons (2010 estimate) domestically, second only to the United States. And, despite having banned e-waste imports, China remains a major e-waste dumping ground for developed countries. Society today revolves around technology and by the constant need for the newest and most high-tech products we are contributing to mass amount of e-waste. Since the invention of the iPhone, cell phones have become the top source of e-waste products because they are not made to last more than two years. Electrical waste contains hazardous but also valuable and scarce materials. Up to 60 elements can be found in complex electronics.As of 2013, Apple has sold over 796 million iDevices (iPod, iPhone, iPad). Cell phone companies make cell phones that are not made to last so that the consumer will purchase new phones. Companies give these products such short life spans because they know that the consumer will want a new product and will buy it if they make it. In the United States, an estimated 70% of heavy metals in landfills comes from discarded electronics.

While there is agreement that the number of discarded electronic devices is increasing, there is considerable disagreement about the relative risk (compared to automobile scrap, for example), and strong disagreement whether curtailing trade in used electronics will improve conditions, or make them worse. According to an article in Motherboard, attempts to restrict the trade have driven reputable companies out of the supply chain, with unintended consequences.